Summary: The current crisis in the UW System disproportionately affects UWM, the only UW System campus with both research and access missions. Broad student access to UWM has been negatively impacted by inequitable funding from the state, and this in turn threatens the ability of UWM to serve the diverse Milwaukee community. UWM enrolls students from across metro Milwaukee and around the state, and serves 40% of the students of color enrolled in the UW System. Inadequate state allocations to UWM have yielded politically produced austerity, undercutting democratic access to public education in Milwaukee. This parallels many other forms of underfunding and downright abandonment of the state’s largest city.

UWM’s current structural deficit would be eliminated if the UW System increased UWM’s per-student funding allocation to just half the level that UW-Madison receives. UWM AAUP calls on the UW System, the UWM administration, and our elected representatives to ensure equitable support for UWM.

As the Chancellor’s Campus Organization and Effectiveness Team (CCOET) has set out to address the structural deficit at UWM, serious questions have been raised about whether the development and eventual implementation of the committee’s recommendations adhere to established shared governance practices. UWM AAUP would like to redirect attention to CCOET’s charge: the task of closing an ongoing annual budget deficit of $15-$20 million. This task has been presented to the campus community as urgent and necessary, its seriousness self-evident, its resolution the sole responsibility of UWM. Not closing the deficit—or demanding outside help in doing so—is, by implication, unthinkable.

Among the chief causes of UWM’s structural deficit is the institution’s chronic underfunding by the University of Wisconsin (UW) System. Each year, state appropriations are passed to the UW System for allocation to its 26 colleges and universities. As UWM has pursued its state-mandated dual missions of access and research, its per-student funding from the UW System has dropped below half that of its doctoral cluster peer, UW-Madison, which lacks an access mission. As Figure 1 shows, while UW-Madison receives more than $12,400 per student, UWM receives less than $5,200 per student. 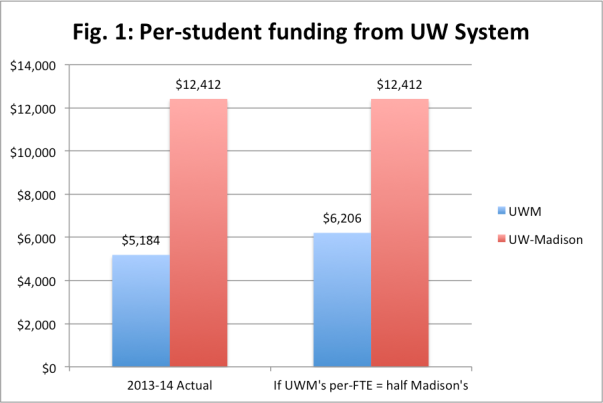 This underfunding is deplorable in light of UWM’s unique dual mission of access and research. UWM educates more Wisconsin residents than any other university, and 40% of the students of color in the UW System are enrolled at UWM.

For over a decade, increasing enrollments have allowed UWM to accommodate this structural inequality through growth. Now that UWM’s enrollments are impacted—in part by increased in-state admissions at UW-Madison—it is time for the UW System to address this ongoing inequity. The present crisis demands a direct remedy for the persistent inequality in funding that undermines the health and well being of the state’s most racially and socioeconomically diverse public university.

Approximately half of UWM’s structural deficit has already been addressed through the FY17 cuts proposed by the Budget Planning Task Force (base budget cuts of $14.5 million). UWM’s administration must demand that the remaining deficit be filled through increased funding from the UW System. If UWM’s per-student (FTE) funding from the UW System were increased to just half the level that UW-Madison receives, this would yield an additional $23.6 million allocation to UWM (at 2013-14 levels; see Figure 2). This is enough to eliminate the remaining structural deficit. 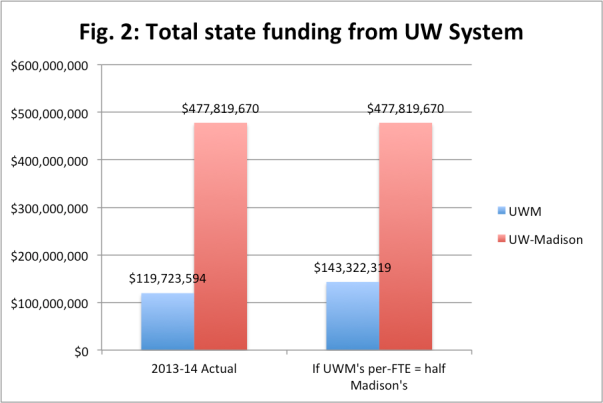 We recognize that funds are scarce across the UW system, and we know that faculty, students, and staff at other campuses have felt the pinch of recent cuts. But the acute nature of the present crisis at UWM requires immediate action.

Residents across Wisconsin understand the consequences of economic inequality, as they are increasingly locked out of essential opportunities. We call on UWM’s administration to do the supposedly unthinkable: to reject fiscal austerity. We call on the UW System, the Governor, and the Wisconsin State Legislature to protect and advance UWM’s vital research and access missions. A commitment to accessible, democratic public higher education in Wisconsin demands no less.